In 1954, Maria Martha Hacker Rocha, a statuesque beauty from Brazil, was the odds-on favorite to win the Miss Universe pageant. Admirers from all over the world were captivated by her beauty, class and amazing blue eyes. 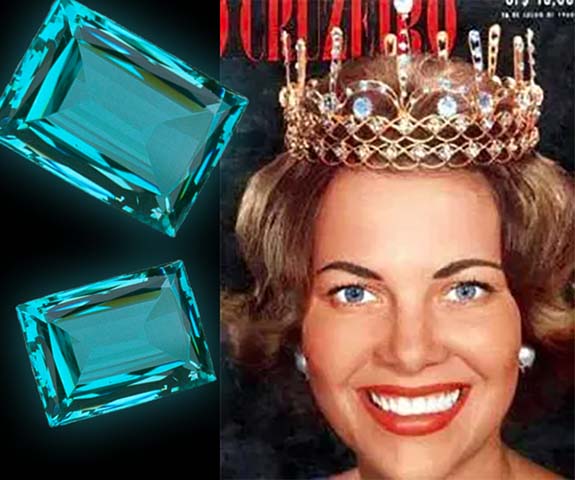 Although she eventually earned runner-up status to American Miriam Stevenson, the 18-year-old from the Brazilian state of Bahia would be forever linked to the world of fine jewelry and March’s brilliant blue birthstone — the aquamarine.

About the same time as Rocha was competing on the world stage, an incredible aquamarine crystal was found on a farm near Teofilo Otoni, Brazil. It weighed approximately 74.5 pounds and the color was so rich, so intense that the Brazilian gem dealers needed to distinguish it from the rest.

But the 74.5 pound specimen was in a class by itself. They decided to name it “Martha Rocha” as a tribute to the Brazilian beauty queen with the captivating clear blue eyes. Even today, gem experts use “Martha Rocha” as a classification of tone and intensity when rating the finest-color aquamarines.

At 81 years old, Rocha is still a symbol of beauty in Brazil, and she has streets named after her in Bahia, Santa Catarina and São Paulo.

Aquamarines are mined in many countries, including Nigeria, Madagascar, Zambia, Pakistan, Mozambique and the U.S., but many of the finest-quality gemstones still come from Brazil.