The diamond-speckled space rocks that exploded over northern Sudan and littered the Nubian desert in 2008 may hold evidence of a "lost planet," according to Swiss scientists.

Philippe Gillet, a planetary scientist at the Federal Institute of Technology in Lausanne, Switzerland, and his team believe that the diamonds present in the meteorite fragments hold compelling evidence of a solar system that looked a lot different than it does today. 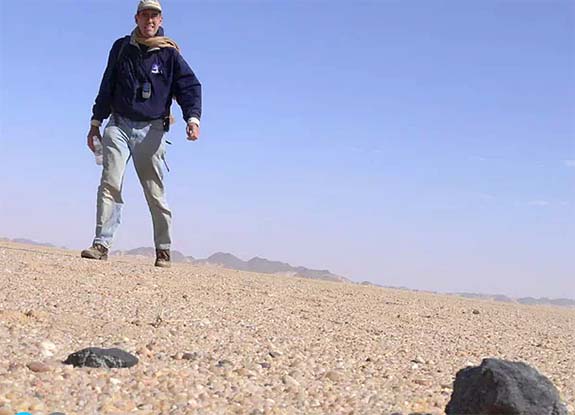 Instead of hosting just eight planets, they say, our solar system likely teemed with a mix of planets and protoplanets that circled the sun and sometimes collided with each other, spewing space debris. A small piece of that debris eventually found its way to Earth and explode in our atmosphere on October 7, 2008.

Found trapped within the space-born diamonds were tiny inclusions, or imperfections, that supported the idea of the material's "lost planet" origin. The imperfections were made of chromite, phosphate and an iron-sulpher compound. Since the iron-sulpher compound can only form at pressures above 20 gigapascals (about the pressure seen 400 miles below the Earth's surface), the scientists believe that the material had to come from a large planetary body — perhaps a protoplanet that was capable of delivering similar pressure.

The scientists believe the size of the "lost planet" was similar in size to Mercury or Mars. The diamond inclusions provide "the first compelling evidence for such a large body that has since disappeared." Their findings were reported recently in the journal Nature Communications.

So, once again, diamonds are proving to be a scientist's best friend.

“What for a jeweler is an imperfection becomes for me something that is very useful because it tells me about the history of the diamond,” Gillet told the New York Times. “It has a chemistry which has no equivalent in the solar system today, in terms of planets."

The Almahata Sitta meteorites — 480 pieces in all — were classified as ureilite, a type of rare meteorite that is embedded with various minerals. Ureilite meteorites are extremely rare. In fact, less than 1% of meteorites have this classification. The Swiss scientists suggest that all ureilite asteroids may be remnants of the same long-lost protoplanet.